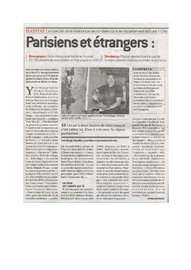 This article appeared in the BIEN PUBLIC - May 2013

The sale and purchase of second homes in the Cote d'Or is a  niche market: Parisian and international clients


Burgundy: According the the Burgundian tourist office, there were 83 796 second homes in Burgundy in 2011.

Trends: The further south a house is situated in the region, the more expensive it becomes.

Second homes in the Côte-d'Or only account for just over 5% of available properties. And the department is divided into two.

The financial crisis has affected the property market.

There was a time when overseas purchasers were interested to buy in the Haute Côte-d'Or (Swiss, Belgians and Dutch in the 2000s, English between 2004 and 2007, Americans after the film Le Chocolat, was made in Flavigny-sur Ozerain). This demand has now disappeared. The crises affected Europeans particularly. However, the south of the department--the wine-producing areas--and associated small villages are still much sought after.
"Our clientele is, above all, Anglo-Saxon," said Beaune property solicitor Anne-Gaël Pary-Avril. "In general, it's wine-lovers and people who enjoy French cuisine."

This trend is confirmed  by Caroline Gigandet who runs Burgundy Home & Services in Beaune, a company which advises and helps clients wanting to invest in property or live in Burgundy. "My business is very active even though I started six years ago during a period when the market was hardly euphoric," she said. "There is always a demand and it's quite varied: Australians, Norwegians, Americans, and sometimes Parisians."

And Dijon residents, you might ask? Apart from those who already have family homes, they don't look for second residence in the  Côte-d'Or. This surprises the professionals. There are some bargains to be had at this point.
THE BIEN PUBLIC - May 2013 - Cyrill BIGNAULT